Do you know what Silicon Valley and a rhizome share in common?
Vianeo sees a clear similarity between this urban area overflowing with the best start-ups in the world and the subterranean part of a plant that might be considered as a foundational pillar.  Let’s look closer at what links these two apparently unconnected things.

After a visit to the Silicon Valley in June, we found the image of the rhizome to be the perfect metaphor for the fertile soil for innovation.

The rhizome has an original feature that few ecosystems can match. Defined as “an underground and sometimes subaquatic stem, filled with a food store” A rhizome has a large number of functions, each of which can be compared to a fertile ecosystem for innovation :

Each of these 4 points perfectly illustrates the characteristics of a fertile ground for innovation.

Stabilising the soil to prevent erosion: “Innovate or die”

An ecosystem that encourages innovation often, by virtue of its geographical location, gives rise to stakeholder interaction that is more frequent, concentrated, numerous and fruitful.

The erosion that the rhizome helps to prevent, can be compared to the pressing need to ensure the survival of the ecosystem’s stakeholders and especially, in our example, its economic stakeholders.

Whether we are talking about Silicon Valley or Sophia-Antipolis, which we know well, when faced with possible erosion, the challenge is to attract and retain talent: talented entrepreneurs capable of moving from one project to another and talented employees; however it’s also about attracting financial resources. To achieve this, investors must nourish the ecosystem by reinvesting what they have earned.

A function of an energy store “Concentration and focus”

The interlaced roots of the rhizome differ from conventional roots. They are known as ‘storage roots’, in other words a root used to store essential nutrients.

An ecosystem that encourages innovation must be able retain and concentrate the wealth it produces thus ensuring that all the stakeholders that have taken root can reap the maximum rewards.

Any ecosystem stakeholder must first find the resources locally within its own ecosystem to fuel its growth.   The network of business incubators, accelerators, start-up associations such as Réseau entreprendre as well as local authorities, etc., are simultaneously able to inject vital energy into the young shoots and guide the young roots towards fertile soil.

An ecosystem by definition encourages, or is even dependent on diversity since each of its inhabitants increases its chances of survival by ensuring that its own talents, needs or conversely failings are symbiotic with those of the other inhabitants. Mutual trust between stakeholders is key to building the wealth of the ecosystem.

Within a defined space, meetings are easier and more frequent.  During these meetings, ties will be strengthened between stakeholders who to all intents and purposes are very different; the CEO of a major group rubs shoulders with the founder of a start-up, the accountant knows the lawyers who know political decision makers. Whether we like it or not, business is first and foremost a human adventure which often hides unexpected symbiotic relationships at its core. In these meetings, serendipity and effectuation make perfect bedfellows and add inestimable value to stakeholders in the ecosystem.

In a rhizome, nothing is lost, everything is re-used. Plants that die improve the soil by adding new organic matter.  The same is true with innovation; failures, trials and errors are never losses, instead they are learning tools that lead to a better performance on the next attempt.  Projects that don’t succeed can give ideas to other projects and their managers can provide support to other projects, bolstered by their consolidated experience.

On this point, the French approach differs from the United States. We have to make sure that the ecosystem thrives from working more frequently and effectively with entrepreneurs who have learnt many lessons from biting the bullet by ending a project.  At Vianeo, we are particularly proud that our ecosystem contains this kind of experienced consultants who are qualified to provide support to others!  In Silicon Valley, any ‘failed’ project owner will be quickly re-assigned to another project!

Based on these 4 functions, the rhizome is clearly the ideal place for developing many new shoots. In short, what’s important to retain is that this is the ideal reality for an ecosystem to encourage innovation.

The so-called fertile soil of an ecosystem is indeed highly conducive to innovation, thanks to the golden triangle of 3 essential cornerstones: people, financing and projects. If these three variables are to create unbeatable value, the rhizome must be able to continuously circulate energy.

To achieve this, each stakeholder must learn to trust its peers, be curious about sharable wealth and search for synergies (or symbiotic relationships) that will help them grow better, faster and taller.

With Vianeo, evaluate, select and manage a portfolio of innovative projects 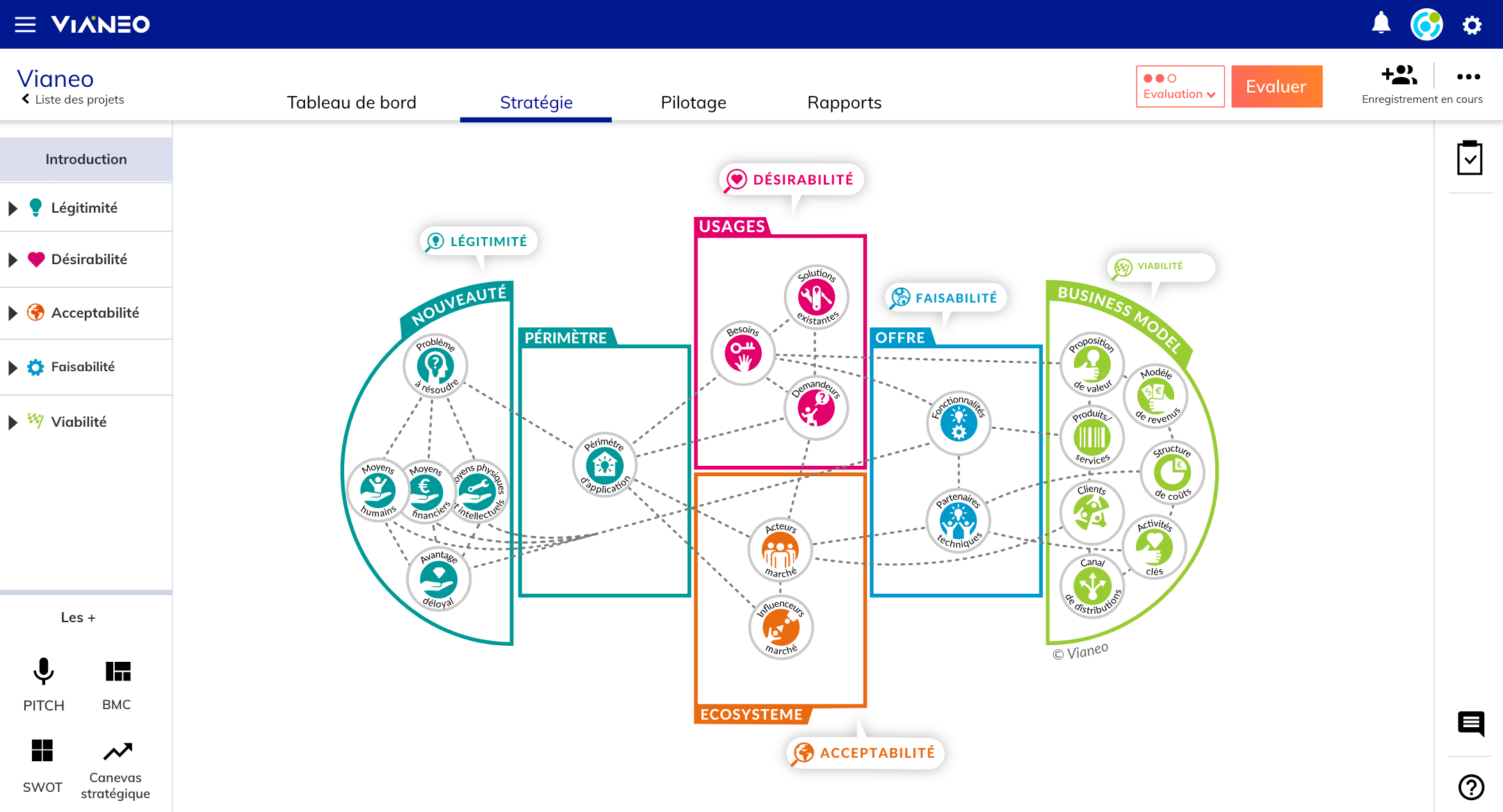 IMAgine Days : Feedback from Vianeo’s use on a complex DSI project
The 4 steps and keys to facilitating a training course or a distance workshop